The University of Chicago scholar, Marshall Hodgson, author of the seminal three volume Venture of Islam (Chicago U.P. 1974), is responsible for a number of neologisms and some very careful usages—a few have been widely adopted by scholars of Islamic studies, religion and global history. He wrote:

A number of these terms, such as “Islamdom” were forced or clumsy and are not widely used; others such as “Persianate” have been adopted. Perhaps one of the most widely used Hodgsonism is “Islamicate”. He explained:

At any rate, it is already felt improper, among careful speakers, to refer to some local event as taking place ‘in Islam’, or to a traveller as going ‘to Islam’, as if Islam were a country. The adjective ‘Islamic’, correspondingly, must be restricted to ‘of or pertaining to’ Islam in the proper, the religious, sense, and of this it will be harder to persuade some. When I speak of ‘Islamic literature’ I am referring only to more or less ‘religious’ literature, not to secular wine songs, just as when one speaks of Christian literature one does not refer to all the literature produced in Christendom. When I speak of ‘Islamic art’ I imply some sort of distinction between the architecture of mosques on the one hand, and the miniatures illustrating a medical handbook on the other even though there is admittedly no sharp boundary between. Unfortunately, there seems to be no adjective in use for the excluded sense-‘of or pertaining to’ the society and culture of Islamdom. In the case of Western Christendom we have the convenient adjective ‘Occidental’ (or ‘Western’-though this latter term, especially, is too often misused in a vaguely extended sense). ‘Occidental’ has just the necessary traits that ‘West Christian’ would exclude. I have been driven to invent a term, ‘Islamicate’. It has a double adjectival ending on the analogy of ‘Italianate’, ‘in the Italian style’, which refers not to Italy itself directly, not to just whatever is to be called properly Italian, but to something associated typically with Italian style and with the Italian manner. One speaks of ‘Italianate’ architecture even in England or Turkey. Rather similarly (though I shift the relation a bit), ‘Islamicate’ would refer not directly to the religion, Islam, itself, but to the social and cultural complex historically associated with Islam and the Muslims, both among Muslims themselves and even when found among non-Muslims. [Venture I:58-59]

The Qurʾan, thus, is “Islamic” scripture while the Jewish scholar, Mosheh ben Maimon (d. 1204 C.E.) (a.k.a Mūsā ibn Maymūn or Maimonides), was a great Islamicate thinker and the Christians of Syria, Palestine and Egypt are Islamicate communities.The building in this image, the Church of the Holy Sepulchre, venerated as the site of the crucifixion, burial, and resurrection of Jesus and the most sacred of Christian pilgrimage sites, is therefore an Islamicate building.

Do you know why the ladder has been in place for over a century and can not be moved?

The Secret Order of Assassins

Hodgson’s doctoral research on the early Nizari Ismailis and their polity centred on the fortress of Alamut, was groundbreaking. His dissertation, completed in 1951, was published in 1955 as The Secret Order of Assassins. In 1968, he published a chapter, The Ismaili State, in The Cambridge History of Iran in which he refined some of his findings. In 2019 I defended my dissertation, Reconstructing Alamut: New Approaches to the Study of the Qiyāma and the Nizari Polity in Iran, on the same subject and am refining my findings for publication. 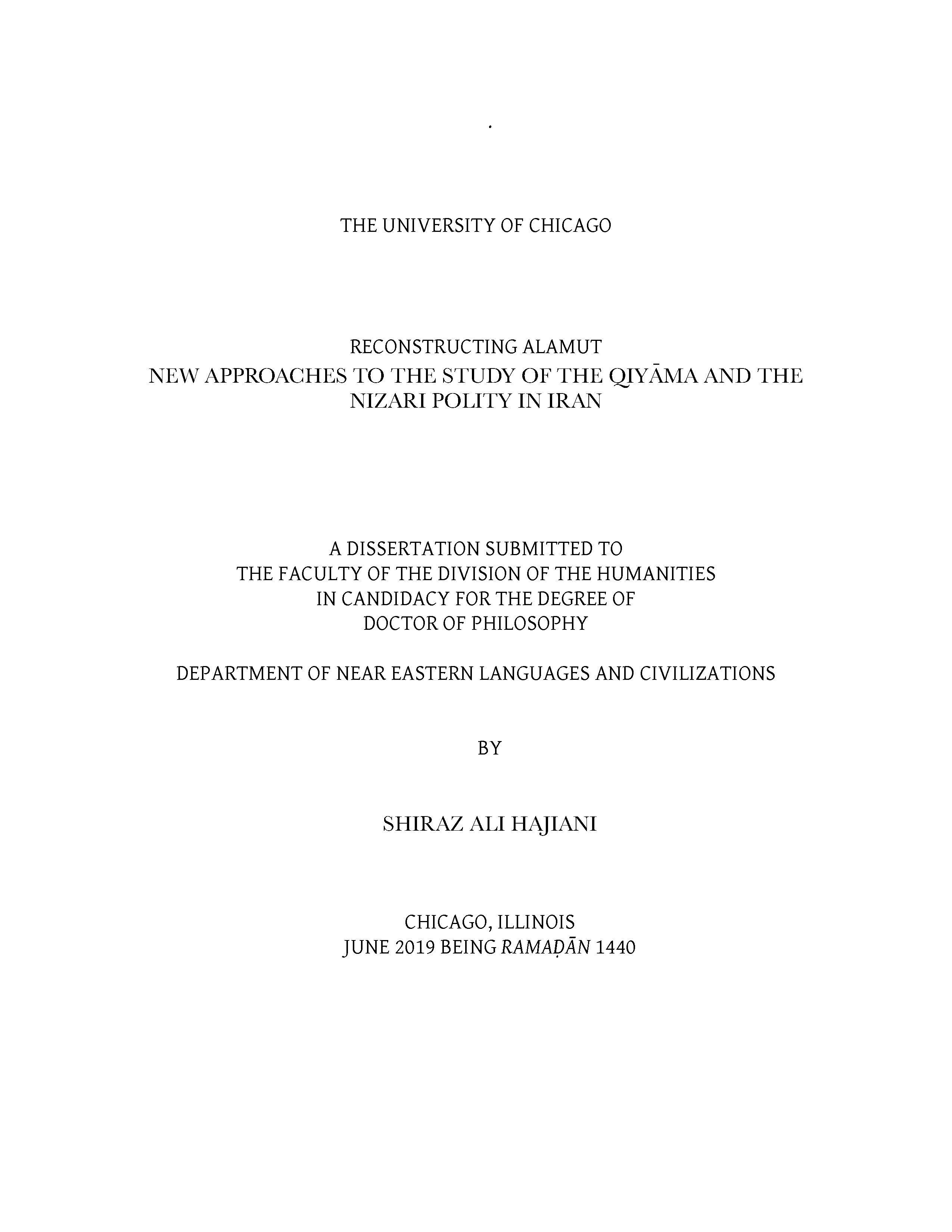 Reconstructing Alamut: New Approaches to the Study of the Qiyāma and the Nizari Polity in Iran

Please come back from time-to-time for more Islamicate Ventures.